Join us on February 27th 2015 for a discussion hosted by the Levana Gender Advocacy Centre and the Gender Studies Department at Queen’s University that seeks to remap the relationship between black and indigenous peoples. This symposium will address the academic, activist, and creative conversations surrounding anti-blackness, indigeneity, settler colonialism and decolonization. “Colonial Intimacies” intends to engage with these topics in ways that are no longer limited to identity politics that often foreclose possibilities for community building. It will recognize that decolonization will be an inherently messy process wrapped up in disorder, but it is this very disordering that disrupts white supremacy and colonial logics. This event will feature keynote addresses by Andrea Smith (University of California, Riverside) and Rinaldo Walcott (University of Toronto) as well as interactive workshops. This will allow us to consider what new narratives and meanings emerge when reading black and indigenous encounters with colonial power as intimately connected and situated within logics of white supremacy. These encounters have inflicted deep wounds on both communities, which has sustained both settler colonialism and anti-black racism. “Colonial Intimacies” posits that “entering the space of each other’s wounds” (Georgis 2013) would no longer allow these communities to recognize each other as strangers but as intimately connected in both suffering and survival. This conversation refuses strategies that simply replicate the violence of the past but seeks a new way forward through radical politics of love.

The better futures collective is a diverse group of people who engage in anti-racist, anti-homophobic, anti-transphobic and anti-ableist work that seeks to produce new strategies for decolonization. We are committed to supporting marginalized communities in their efforts to secure better futures. 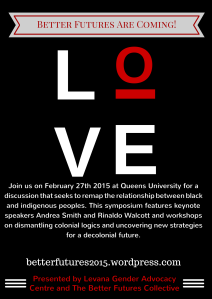 Professor Andrea Smith received her Ph.D. in History of Consciousness at UC Santa Cruz in 2002.  She currently teaches in Media and Cultural Studies at the UC Riverside. Her publications include: Native Americans and the Christian Right: The Gendered Politics of Unlikely Alliances and Conquest: Sexual Violence and American Indian Genocide. She is also the editor of The Revolution Will Not Be Funded: Beyond the Nonprofit Industrial Complex, and co-editor of The Color of Violence, The Incite! Anthology. She currently serves as the U.S. Coordinator for the Ecumenical Association of Third World Theologians, and she is a co-founder of Incite! Women of Color Against Violence. She recently completed a report for the United Nations on Indigenous Peoples and Boarding Schools.

Rinaldo Walcott is the director of the Women and Gender Studies Institute at the University Toronto. His research and teaching is in the area of Black Diaspora Cultural Studies with an emphasis on queer sexualities, masculinity and cultural politics. A secondary research area is multicultural and transnational debates with an emphasis on nation, citizenship and coloniality. As an interdisciplinary scholar Rinaldo has published on music, literature, film and theater among other topics. All of Rinaldo’s research is founded in a philosophical orientation that is concerned with the ways in which coloniality shapes human relations across social and cultural time. Rinaldo is the author of Black Like Who: Writing Black Canada (Insonmiac Press, 1997 with a second revised edition in 2003); he is also the editor of Rude: Contemporary Black Canadian Cultural Criticism (Insomniac, 2000); and the Co-editor with Roy Moodley of Counselling Across and Beyond Cultures: Exploring the Work of Clemment Vontress in Clinical Practice (University of Toronto Press, 2010).

In this workshop, we wish to explore the ways in which racializing processes in the Americas have utilized interracial mixture as a tool of colonialism. From blood quantums to miscegenation laws, how can we frame various relational logics of race? Moreover, how can these shared histories be reinterpreted into new identities that foster alliances across black and indigenous communities in order to dismantle colonial logics? How can decolonization practices be enacted from reimagining mixed race subjectivities and politics as antagonistic to white supremacy?

This holistic and interactive workshop facilitated by Queens University’s Four Directions Aboriginal Student Centre uses participatory popular education methodology to raise awareness and understanding of the history of the relationship between Indigenous and non-Indigenous peoples in Canada. The goal of this workshop is to deepen participants affective and cognitive understandings of the the historical and contemporary impact of colonization and to investigate the relationship between the settler-colonial state and indigenous peoples.

This session will explore how individuals understand gender, sexuality and race within a colonial context. The facilitators of this workshop, who are scholars and artists, will draw upon their work to engage participants in a dialogue that develops different frameworks for future thought, organizing and social change.

This workshop will consider how the prison is a site of racial management, examining the over-representation of Black and Indigenous incarcerated peoples. The discussion will unpack how these two communities have different encounters with the state, and consider their certain particularities, while thinking about how the mass incarceration of Black and Indigenous peoples has negatively affected their families and communities, and the relationship between cheap racialized labour and the economy. The intention of this workshop is to open a space for narratives of abolition as we critique the prison as underwriting ongoing colonial processes. What does the prison hide from public knowledge? How does the institution of the prison work to disavow histories of slavery and colonialism?

The keynote session is open to the public. Registration for workshops is now closed.